I studied at the Architectural Association in London for one term during my Bachelors degree. The studio tutor was Naiara Vergara and the project was about the redesign of a highway in Bilbao soon to become vacant due to the city’s plans to build another highway to replace this one. This project was about hybridizing a highway with program that would revitalize the community at the perimeters of Bilbao, adjacent to the A8. The conceptualization begins with a superimposition of photographs as a hybrid action; compositional patterns merge, and form, similarities accentuate eachother, differences are exposed, juxtaposition of contrasting atmospheres creates new meaning in relation to one another.

Different programs on the site converge to create undefined, new spaces, similar to how new alignments emerge in the photographic hybrid. The intervention occupies the street level, the highway surface, and the space in between.

The centre was designed to preserve the notion of ‘movement’ on the highway but in a relevant way, so it allows seasonal parades to go through it on the street level and a bicycle route on the highway designed to see public art in the city.

Residents circulate through the path which is also used by the visitors as a walkway displaying all the resident activities. The path weaves through outside and inside spaces. The internal path has a roof skylight structure engulfed by Spanish moss, an organic superimposition onto the city-like structural grid. The visitors see an authentic side of Bilbao not present on the riverside. 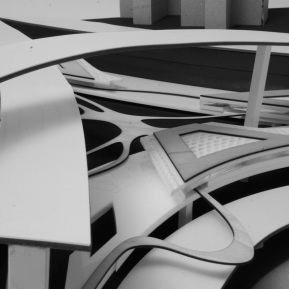